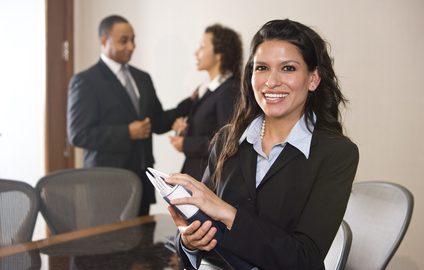 We have previously mentioned the importance of being able to speak Spanish in the world and particularly throughout the Americas from a business perspective.

First of all, if you are attempting to do business in Spanish, do not attempt it without an interpreter present unless you are fluent.

Do I Use A Formal or Informal Greeting?

I have seen various blogs and articles about learning a new language that are critical about programs I have featured such as Pimsleur, Fluenz, Rosetta Stone and Living Language that teach Spanish in a fairly formal manner, i.e. addressing someone as Mister or Miss, using the formal word for “you” (usted) instead of the informal (tu) – their justification being that most people don’t talk like that anymore. Well, I can tell you from personal experience that when it comes to the workplace or business settings they are absolutely wrong!

You go to a business meeting, to a government office, bank or even go to meet the family of a girlfriend or boyfriend – you will probably initially be addressed as señor or señora, they will use the formal word for “you” and they will generally expect you to do the same.

If you are learning the language for employment reasons, failure to use the formal expressions won’t get you fired, but in various cases, it may irritate them and some will consider it disrespectful, so don’t start off on the wrong foot.

In business relationships my experience has been that at the first meeting everyone would shake hands, male or female. After the first meeting it will become pretty clear what type of relationship you will have. If it’s close, such as between you and your lawyer, business partner, they will probably start hugging you as a greeting and when departing, while many ladies will use the gentle hug with a couple of “air-kisses”. Let them tale the lead in this. Get used to it, especially the guys who may not be as accustomed to such signs of affection, because it is part of their culture.

Business cards should be exchanged and it is a good idea to have them printed in English on one side and Spanish on the other – present your card Spanish side up. The same should apply for any documents you bring along for presentation. You are in their country and you need to respect that fact.

Meetings should be arranged by prior appointment. As a foreigner, you are expected to be punctual for your meeting, but don’t be surprised in some Latin American countries if this is not reciprocated! If your host is late, do not show any signs of frustration to them or their staff, as they would look at it as a sign of disrespect, even though it is the other way around.

Business relationships are important everywhere, but in Latin America the personal aspect carries much more weight. High pressure tactics are frowned upon and you can expect to attend more than one meeting in person before much progress seems to be made as decisions usually cannot be rushed. Don’t be alarmed if the first meeting is dominated by your Latino hosts discussing their business, history, even their own families. Expect questions about your own family and background also. This initial encounter is usually a “get to know you” event, with the real business coming later.

The boss is important and the bosses in Latin America like to be seen as such, commanding and expecting respect. Unless you know the personality of your client perfectly, don’t think of playing a joke on them or doing anything that has the slightest possibility of being thought of as lacking in respect.

Bring lots of documents,samples and whatever else is relevant with you.

How To Dress For Business In Latin America

Generally, business dealings are more formal in Latin America and going to such a meeting dressed in casual clothes will be frowned upon; just because you will usually be meeting in a tropical climate, at times oppressively hot, does not mean you attend such meetings as if you are going to the beach or park.

For a business meeting, both men and women should dress conservatively – in some places men don’t necessarily need to wear a tie but in many cases it may be advisable, but unless you are certain that modern business casual is the way to go, wear a jacket and tie. Ladies should wear a business suit, either a skirt or trousers for the lower half is acceptable, or a dress. The skirts can be fairly short but not provocatively. My advice is, time permitting beforehand, go check out the offices of your planned meeting to see how people are dressed.

Business lunches are mainly informal, are used more as a “getting to know you” session and are rarely the setting for serious business talk. As in North American or European culture, if you are the person soliciting business or a partnership, don’t be surprised if you are expected to pay, even if they invite you. There will generally not be any sign of an offer to foot the bill, unlike in “our” culture where we often offer to pay, even though we don’t mean it in the slightest.

There is much more to discuss on this topic that I will be sharing with you later.

Learning a second language is a challenge, especially for native English speakers who have been speaking only that language their whole lives. However, learning another language is a great way to...

Rocket Spanish Review There are plenty of language learning platforms out there, but none of them are quite like Rocket Languages. If you want to learn to speak Spanish, we recommend you learn with...

I am a participant in the Amazon Services LLC Associates Program, an affiliate advertising program designed to provide a means for sites to earn fees by advertising and linking to amazon.com. You will not pay more by buying through my links. I suggest certain products because my personal experience or research shows that they may be helpful to you. Thank you for your support.